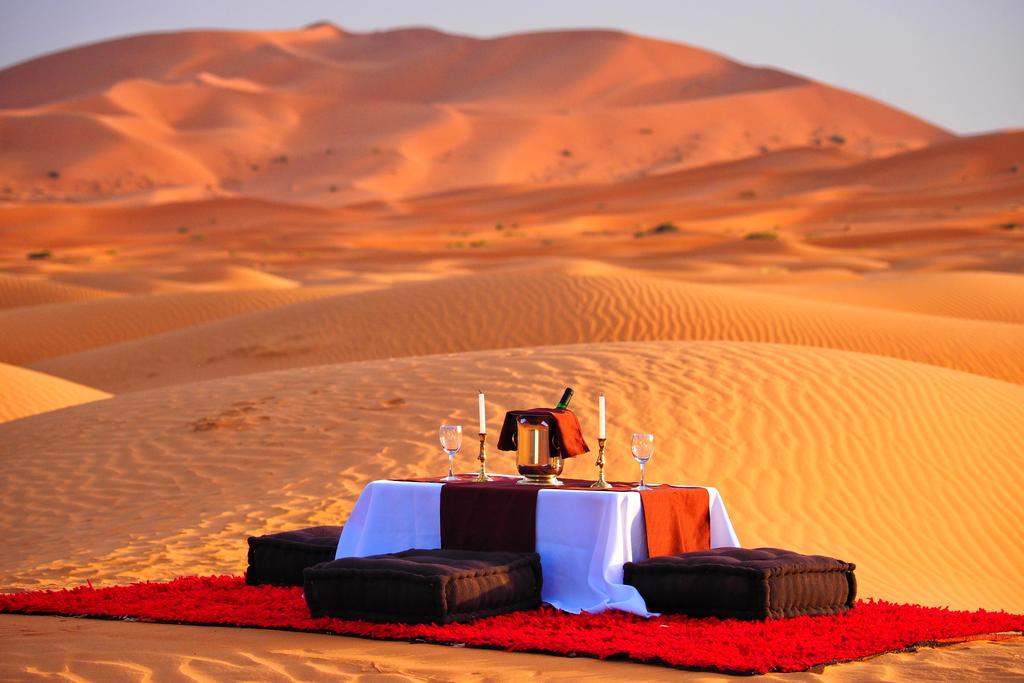 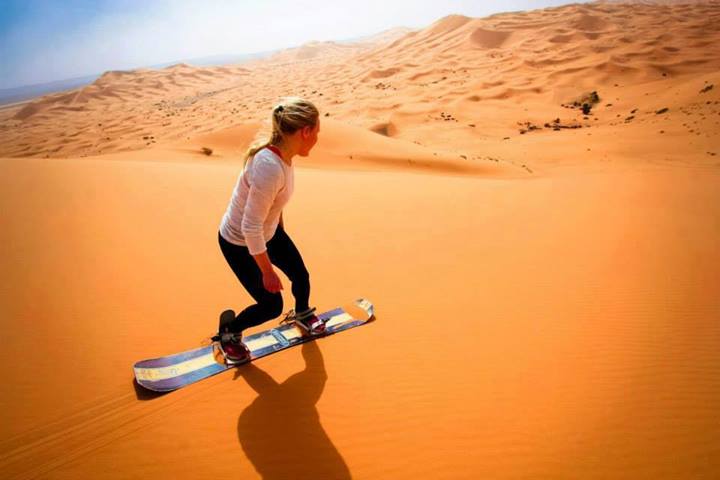 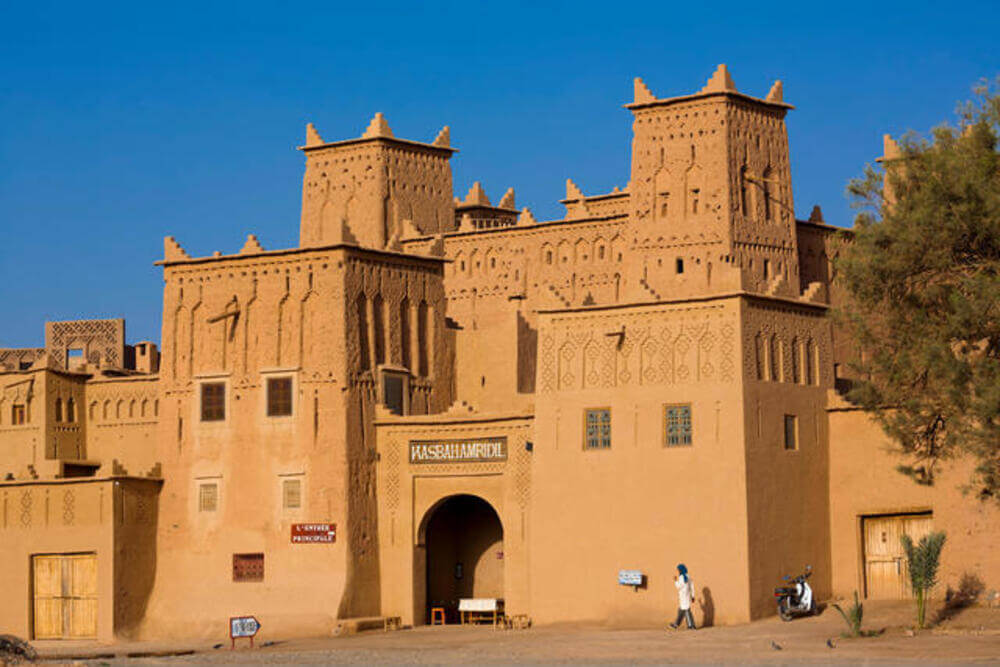 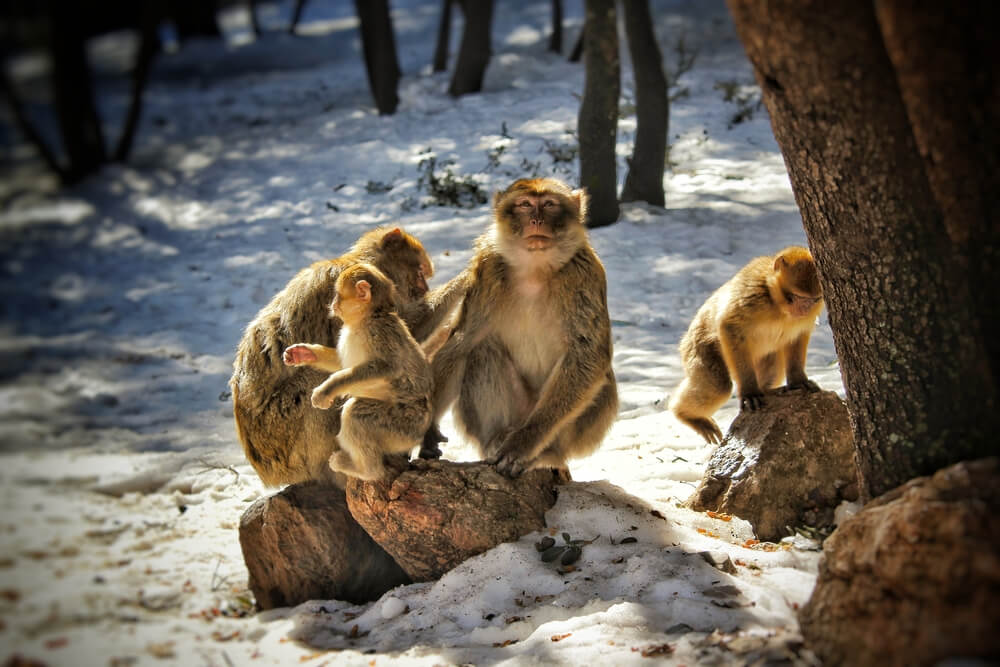 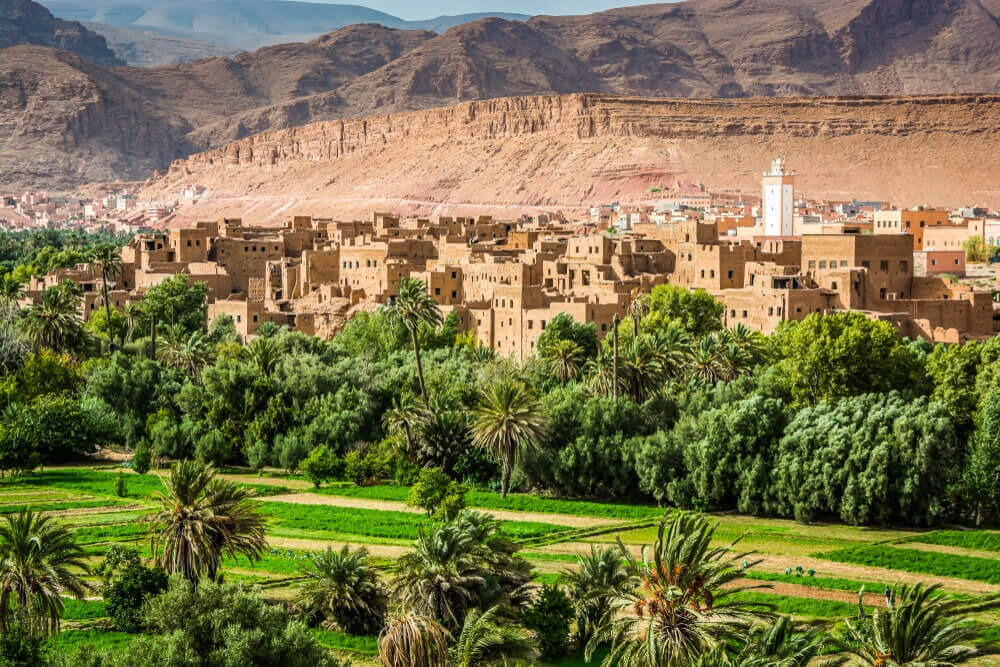 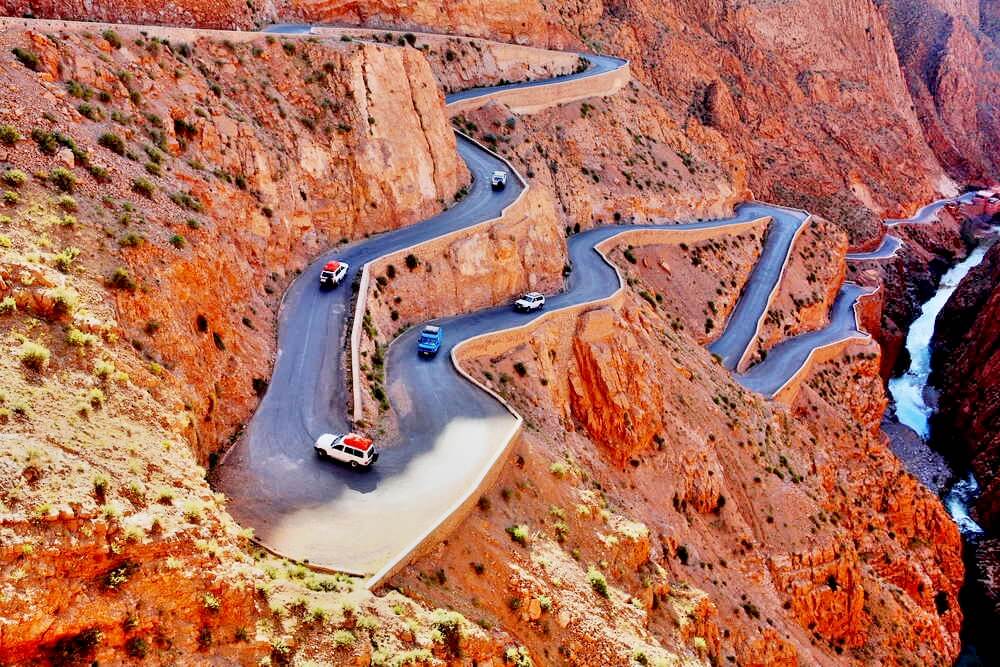 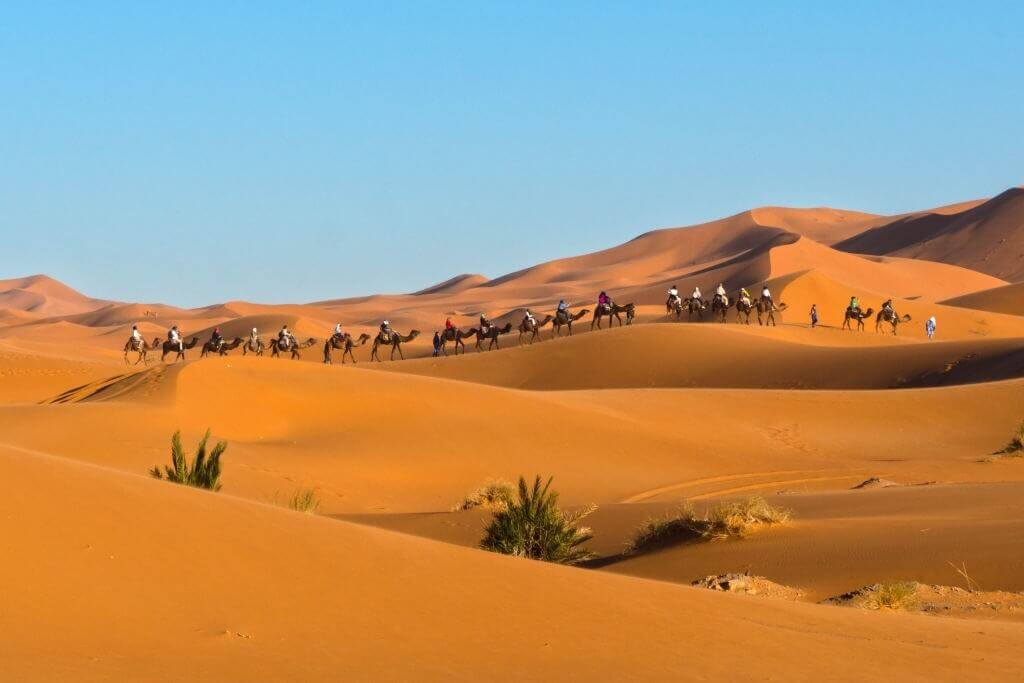 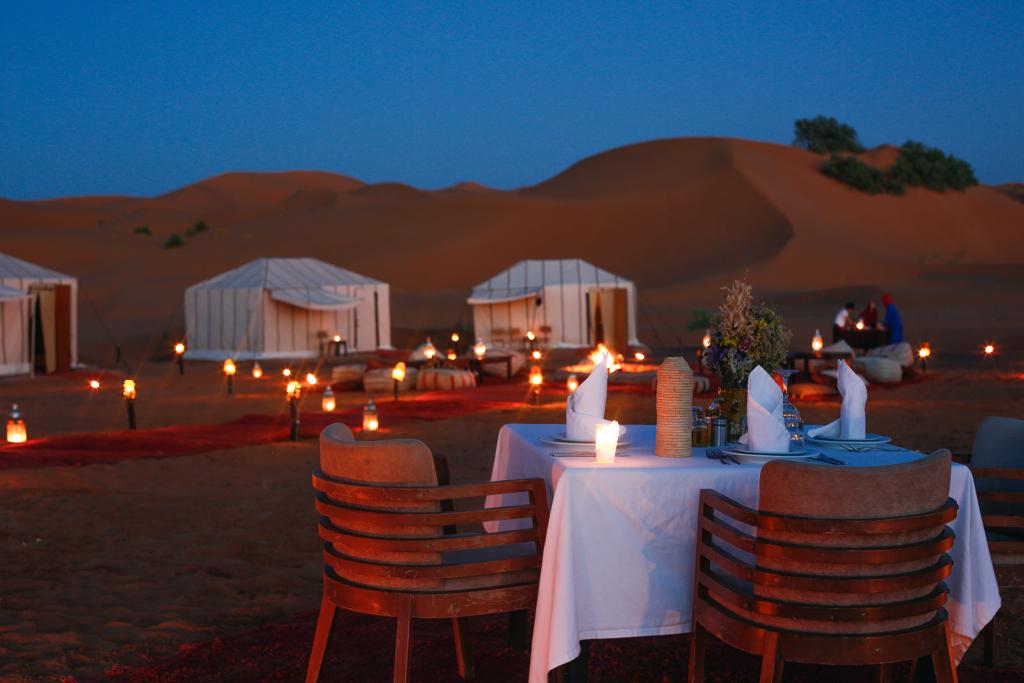 This 3 Days Desert Tour from Marrakech to Fes via Sahara, will take you over the great High Atlas Mountains and through the Tizi n’Tichka pass to the charming ‘Hollywood of Africa’ city of Ouarzazate, and the UNESCO famous Ksar Ait Benhaddou. You then proceed to the UNESCO protected Oasis of Skoura, passing through amazing gorges, Berber mud villages before reaching the spectacular Sahara Desert. Spend a spectacular overnight in a Berber desert camp under the milky way stars.

Visit a nomad family, share a cup of tea with them and discover their lifestyle. Be in awe of the Cedar forests, Barbary Apes, the largest oasis in Morocco in the picturesque Ziz Valley. You will journey through an Alpine-like town on the way to the vibrant and magic Imperial city of Fez.

This 3 day tour offers a taste of Morocco, from mountains, gorges, valleys to Sahara, with many interesting stops along the way. The highlight of this tour is an overnight in a Sahara desert camp under the milky way stars and a camel trek along the shimmering sand dunes of Sahara. The tour ends in Fez.

” Please Click on each section bellow so that the details of each day will appear “.

After your breakfast, your Grand Morocco Guide / Driver will pick you up from your Hotel or Riad in Marrakech, then travel through the dramatic landscape of the High Atlas Mountains, passing through the mountainous Berber villages and over the 2,260 M altitude, Tizi n Tichka Pass. In the High Atlas Mountains, there is a women’s cooperative for making the world famous Argan Oil, a stop there, so you can see the process of how the oil is made. This will enrich your minds more about this wonderful treasured Argan Tree, which has many benefits and which grows only in Morocco. The Argan tree is registered as Bio-patrimony Heritage by UNESCO. 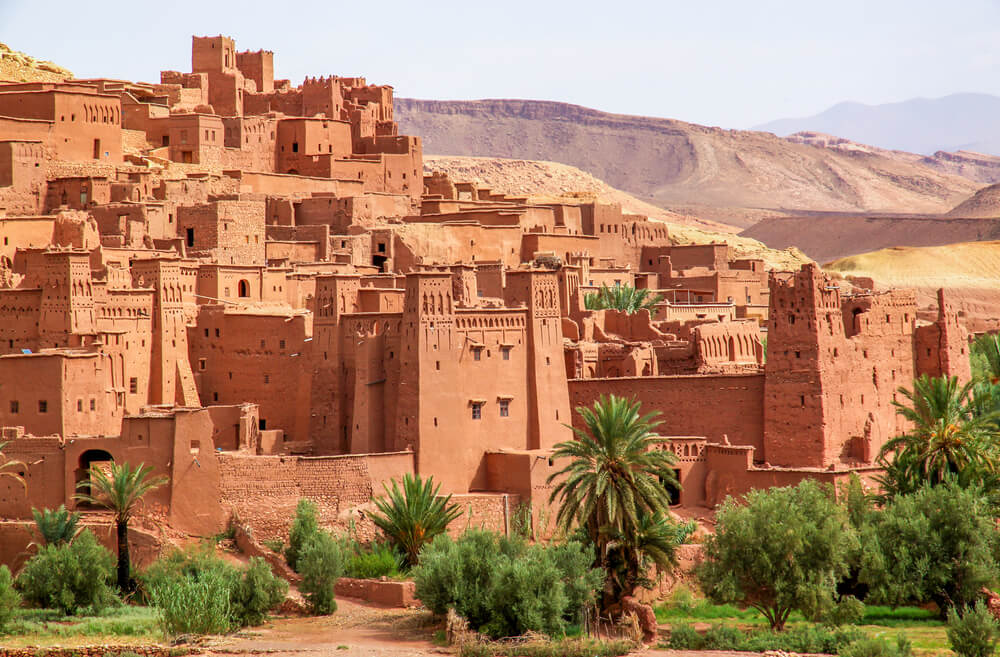 Driving down from the High Atlas Mountains, about 20km before Ouarzazate city, we will stop for a walking visit to explore the famous UNESCO World Heritage listed site of the “Ksar Ait Benhaddou”, listed in 1987. This Ksar or village is one of the most intriguing of the Red Earth Castles lining the ancient road of the camel caravans and it is the oldest mud village in Morocco. It was once a commercial hub for trans Saharan caravan traders. The Ksar has been the back-drop for many international movies, such as Gladiator, Game of Thrones, Prince of Persia,  Indiana Jones, Kingdom of Heaven and many more.

Then we drive to Ouarzazate city, the gateway to the Sahara Desert and is known as the “Hollywood of Africa”. It was a former caravan town on the silk and salt route in the eastern foothills of the High Atlas Mountains. There may be an opportunity for photo stops and for visiting one of the many cinema studios, as we visit this city.  After lunch, we continue through the “Road of the thousand Kasbahs” and earth castles to the ‘Oasis of Skoura’. The Oasis of Skoura is UNESCO protected, and is famous for its numerous Kasbahs and here we will stop to visit the iconic 17th century ‘Kasbah of Amridil’, located in the Oasis and appears on the 50 dirhams note. Amridil Kasbah was founded over 300 years ago and is largely unchanged today. It is one of the living museums of Morocco and is the ancestral home of the Nasiri family. The present generation of the family live on site, have a museum of ancient Moroccan artifacts as part of the Kasbah. In ancient times camel caravans of gold, spice, slaves, salt and other cargo off-loaded in Skoura, after many weeks trekking across the desert from several sub Saharan countries e.g. Mali, Senegal, Ghana and Asia. 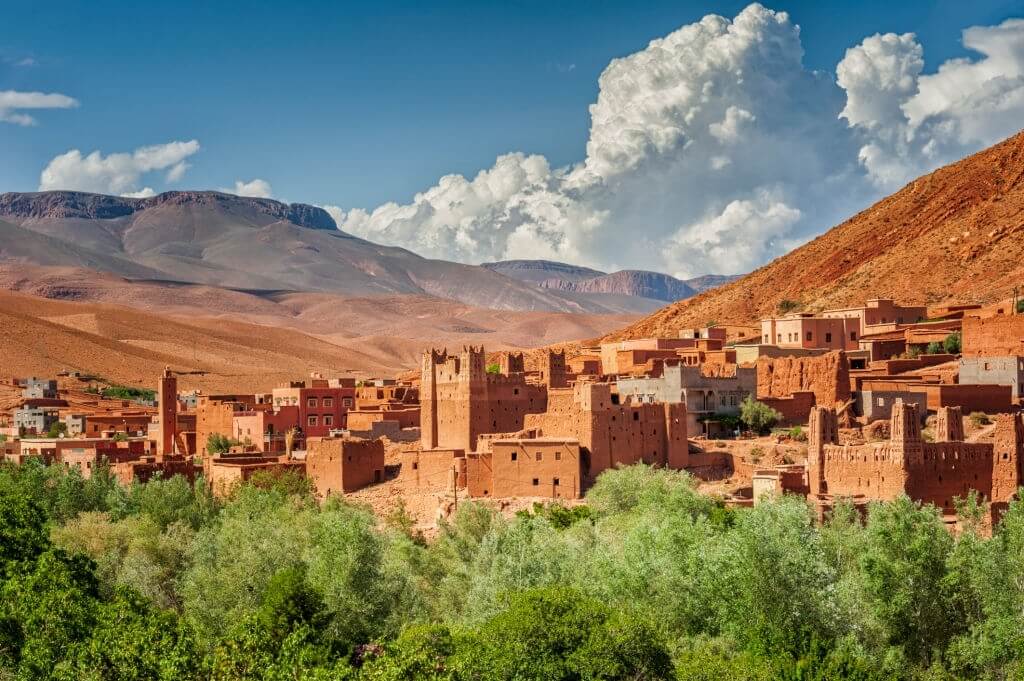 Today, Skoura’s historic mud brick castles remain and traders still arrive with desert products, especially trading salt. After visiting the Amridil Kasbah and along the road of 1,000 Kasbahs, we will pass through Kelaat Mgouna, known as ‘The Rose Capital’ for the famous Damaskina Roses, also known for the annual festival during the rose harvest in May each year, when Miss Rose of Morocco is chosen.

Continuing our journey towards one of the most beautiful valleys in the Kingdom and enjoy colourful Berber mud villages overlooking the amazing Dades Valley. We drive along the spectacular Dades Valley to discover the amazing rock formations, known as “monkey toes” or sometimes “monkey fingers”. These extraordinary rock formations are metamorphic rock, which has been severely eroded by rain, water (which gives a chemical breakdown of the rock), wind and possibly sand storms over thousands of years.

The Dades Valley prides itself for the extensive production of roses, wall nuts, groves of palm and almond trees. It was the site of ancient nomad crossroads and the valley is dotted with Oases and mud brick palaces known as Kasbahs which gives the region its fairy tale nickname. (Overnight in the Dades Valley).

After breakfast in your hotel, we leave the spectacular Dades Valley, and move on towards Tinghir, where we will deviate to a minor road following the river of Todgha Gorge. Contemplate the scenic panoramic views of the old Jewish and Berber mud villages, overlooking the valley. Some time at leisure, to enjoy the immensity of the huge red cliffs of 400 M, where many international rock climbers come to enjoy their preferred sport. 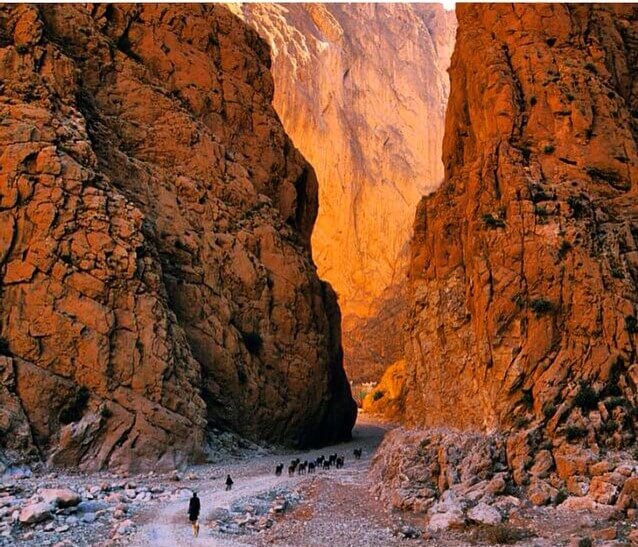 The Todgha Gorge is recognized worldwide for being one of the most spectacular rocky canyons. No wonder this place has been used for the filming of many movies as a magnificent natural setting, with one of the most famous movies being the “Mummy”. In this area of Todgha Gorge, lives a large community of Berber nomads. Here you may see Berber nomad women who have their faces tattooed. They may be seen herding their goats to drink water at the river’s edge and collecting their own water which is carried by their mules back to the caves where they live. (a visit to a nomad family might be possible).

After lunch, you will continue the trip to Erfoud, known as the capital for dates(fruit) and a global entity for fossil stones famous for amazing fossil beds and Paleozoic Strata, where ancient ‘Trilobite’ fossils are found, 505 – 570 million years old. An intriguing visit to a fossil museum is possible where you will witness some of the ancient specimens (Ask your guide). 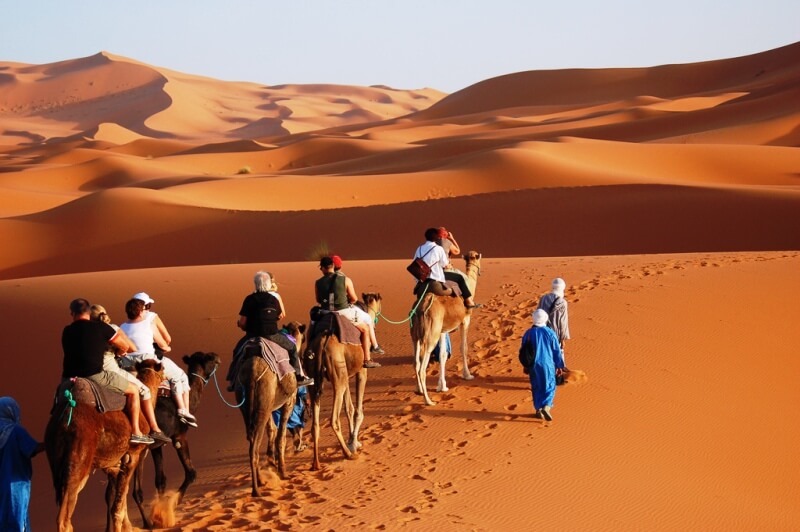 After, we continue to the eminent Sahara Desert town of Merzouga, which is a small Moroccan Berber town in the Edge of Sahara Desert, and regarded as the gate way to the Grand African Sahara, which is a huge expanse of sand dunes. And on approach you will observe a magnificent panoramic view of the golden dunes considered the highest sand dunes in north Africa at 350 M elevation. Then we continue to  the camel station to meet your camel and the experienced camel man who will guide your camel trek to explore the mysterious Merzouga sand sea .

You will enjoy the most charming sunset in the Merzouga Dunes. You will spend the night in a Berber desert camp, in the heart of the dunes. The camp consists of several comfortable Berber tents equipped with mattresses and linen, a dining room, a kitchen and a bathroom. The evening will include dinner, followed by entertainment around the camp fire, listening to traditional Berber drum music, gazing at the night sky full of the milky way stars and having the experience of a life time, which will captivate your heart and soul, not for a night, but forever. (Overnight in Sahara desert camp).

Before sunrise, on waking, you may climb the sand dunes for a fantastic view of the amazing sunrise in the Sahara Desert, followed by a typical traditional Berber breakfast. You will then take the camel ride back through the shimmering dunes to the main road where you will meet your guide and vehicle to start your journey ending in Fes. Leaving Merzouga, we will drive through Erfoud and along the impressive Ziz Valley Oasis, the largest Oasis in Morocco, consisting of 18 species of date palms, totaling approximately 1 million palm trees.

Then on to Midelt, famous for apple growing and is situated between the Middle and the High Atlas Mountains. Lunch is a possibility here. We then travel to Ifrane and en route there will be a stop at the Cedar forests of Azrou, in the Middle Atlas region, altitude 1,278 M. Here, offers a photo opportunity to witness the sublime views of Cork and Cedar forests. You may be able to glimpse and feed the Barbary Macaque Apes  in their Cedar forest habitat and hopefully observe their antics.

The Barbary macaque also known as Barbary ape or magot, is a species of macaque found in the Atlas Mountains of Morocco and Algeria along with a small population of uncertain origin in Gibraltar.

These Cedar plantations in Azrou National Park, are the largest Cedar plantations in the world. Then moving on to Ifrane, where we make a stop to explore this city which has a European image and atmosphere with sloping roofs, chimneys housing large stork nests, generous flower beds and Chestnut trees. Thus, the nickname “Little Switzerland of Morocco”.

The city was French built in the 1930’s and houses the trendy University of Al Akhawayn. Ifrane is known for its mountainous terrain, altitudes to 1,664 M, and cold winter temperatures, -24 degrees C, measured in 1935, the lowest temperature in Africa. Skiing is a popular winter sport in Ifrane. It also claims the distinction of featuring in the top 10 of the world’s cleanest cities, ahead of Ottawa, Helsinki and Singapore.

Then on to your final destination, the amazing city of Fes which radiates a unique aura and which will take you back to the Middle Ages. This UNESCO heritage imperial city is the custodian of 13 centuries of Moroccan history. It is the cultural and spiritual capital of Morocco, thanks to many mosques, ancient religious schools, historic gardens, fortified walls, gates, palaces, squares and souks, left by the fingerprints of successive states and races from Berbers, Arabs, Andalusians and Jews.

You will be delivered to your Riad or Hotel in Fes, as your epic journey with Grand Morocco ends, and we hope you have enjoyed your glimpse into Moroccan life, culture, amazing landscapes and Berber people and that you will depart Morocco with spectacular memories of what you have seen, explored and experienced with us.

WHAT IS NOT INCLUDED :

This * 3 Days Desert Tour from Marrakech to Fes itinerary is customised by Grand Morocco LLC.  “If our set itineraries do not match what you are looking for, please contact us and we will tailor-make an itinerary to suite your requirements”.